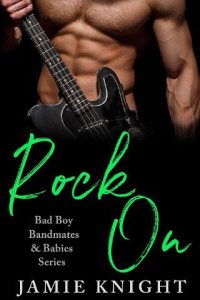 He was my enemy.
But now he’s the father of my child!

Adam is so cocky and smug.
It doesn’t matter how hot he is.
Nor how good his band is.
I don’t want to be anywhere near him.
But now I have no choice.
Because we’re locked down together!
With nothing to do but make music.
And loves?!
And babies?!?!?!

I used to hate him but then he rocked my body.
Now is the rhythm of my heart changing to love?

Rock On is a box set duo of two steamy rock star romance books, featuring bad boy bandmates and babies! Every book in this series is a standalone that can be read on its own but that is also connected to the other books in the series by the setting of a record label in Seattle and by characters who are friends.
The first book in this box set, My Bandmate’s Secret Baby, was previously published on its own. The second book, Locked Down with the Rockstar, is new and has never been published