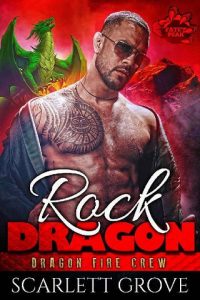 Can a Dragon Rock Star’s love change the heart of an Assassin?

Iva Rose is a highly trained killer. Her next assignment, Dimitri Sokolov, the rock star known as Dimi Love. To get close to her target, she breaks into the shifter dating app, making her the rock dragon’s mate.
Dimitri has been admired and worshiped by humans for centuries. As a modern rock star, he has legions of fans all over the world. After moving to Fate’s Peak to join the Dragon Fire Crew, he’d hoped he’d finally find his mate and fill the empty space inside his heart.
When Iva is matched with Dimitri, she wonders if she can really go through with the job. She’s not sure she wants he life of a killer. Maybe after one last job she’ll retire to the tropics.
Iva arrives in Fate’s Peak and sparks ignite, literally. The bomb Iva planted blows up Dimitri’s dressing room. But he’s not in it. He finds her making her escape out the back door.
Dimitri knows his mate on sight and whisks her away to his mountain home.
Can Iva allow herself to love a dragon, or will she only touch his heart with the cold tip of her blade?