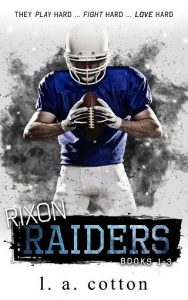 The bestselling Rixon Raiders series has been bundled together to bring you over 1000 pages of angsty and addictive sports romance.
Follow three couples as they navigate the ups and downs of friendship, love, and football.

THE TROUBLE WITH YOU:

Hailee Raine only has to survive one more year.
One year of life in her football obsessed town.
One year of nauseating school spirit.
Just one more year of her cruel step-brother Jason; and his cocky, arrogant, football-playing friends.
She hates them. Especially, Cameron Chase, the guy she thought was different.

Cameron Chase has the world at his feet.
He has it all; good looks, talent, and the charm to go with it.
He has colleges lined up at the door, all wanting a piece of Rixon Raiders star wide receiver.
Until something threatens everything he’s ever worked for, and only one person can quiet the war raging inside him.
But he’s supposed to hate her; his best friend’s sister.
She’s off-limits.
Untouchable.
She’s trouble with a capital T.
Then Hailee finds herself in the middle of a football prank gone wrong…
And suddenly hating each other never felt so good.

THE GAME YOU PLAY:

Felicity Giles has a list.
Lose her virginity.
Meet her knight-in-shining-armor and fall in love.
Have the best senior year a girl can have.
The only problem? Her knight isn’t a saint, he’s a villain, and she’s pretty sure he’ll destroy her before ever handing over a piece of his heart.

Jason Ford has a plan.
Win State and go down as one of the most successful Quarterbacks in Rixon Raider history.
Head off to college and pursue his dream of being drafted to the NFL.
Avoid the girl under his skin. Felicity Giles, his stepsister’s best friend and perpetual pain in his ass.

She’s annoying as hell.
Quirky.
She’s a game to him, nothing more.
Until his arch rival comes after him and the few people he cares about … and Felicity gets caught in the crossfire.
And suddenly hating her feels a whole lot like falling in love.

THE HARDER YOU FALL:

Mya Hernandez has scars.
The kind that run deep and leave marks.
Rixon is only supposed to be a temporary place to hide, but it’s quickly becoming something more.
She’s almost certain it has nothing to do with the blond-haired, blue-eyed football player who makes her laugh. Who makes her believe in fairy tales again.
Even if she knows her life is destined to be nothing more than a tragedy.

Asher Bennet has secrets.
Not the scandalous kind, but the ones that fester, slowly eating away at your soul.
On the face of it, he’s Mr Popular, always down for a party and causing a little mayhem.
But on the inside, he just wants someone to see him. Really see him. Too bad the one girl who sees past his facade has already friend-zoned him.
It’s probably for the best though.

She’s different.
A fighter.
She’s everything he wants but can never have.
Until Mya’s past and Asher’s present collide in ways neither of them saw coming.
And suddenly the thing you need most is the very thing you’re supposed to hate.