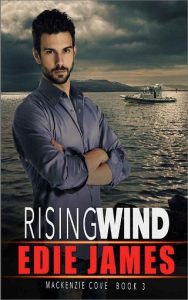 She lives life by her own rules. Trust no one is first on the list.
He’s sworn to protect her, but the secrets she’s holding back will get them both killed.

Being a middle son in the hard-driving MacKenzie family, Harbor patrol officer Teo MacKenzie knows how to tow the line and stay out of trouble. He works hard, plays hard, and prays hard.
But the day he finds an unconscious woman adrift on an outgoing tide, all the rules he’s lived by evaporate, because if he’s going to keep Dr. Kendall Rodriguez alive, he’ll need to rewrite every single one of them.
After a hardscrabble childhood in foster care, Kendall Rodriguez can hardly believe she’s landed her dream job as a clinical researcher for an up and coming firm testing a revolutionary new drug. But her dream becomes a life-threatening nightmare when she discovers the new miracle drug kills.
Now she’s running for her life. Trust the wrong person, and it’s game over, but without help, she won’t live long enough to expose the cover up.
If Teo MacKenzie and his clan aren’t the answer, she’s as good as dead.

Welcome to MacKenzie Cove, a small beach town full of big secrets…and deadly lies. Join the tight-knit MacKenzie clan as they dodge killers and unravel mysteries, finding love and renewed faith along the way. A series of clean, inspirational action adventure romances, each guaranteed to lift your heart.