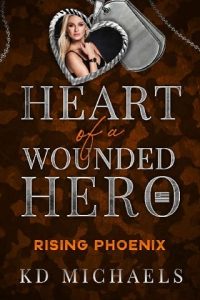 After a harrowing third tour in Afghanistan that she barely survived, Jenniffer ‘Phoenix” Lopez spends her days training dogs for the police department and to be companions for wounded vets. As one of the most sought-after dog training businesses in San Diego, she finally putting her life back together when she meets him…
After a mission that went horribly wrong and ended his military career, Jackson ‘Preacher’ Axelson found his calling. Working alongside his best friend in the police department, he’s excited to be transferring to the K-9 unit after years on patrol. Meeting the intriguing dog trainer turns his world upside down and has him longing for things best left alone.
Still struggling with the nightmares of that fateful mission, Jenniffer fights to set her world to rights. But on the anniversary of her world imploding, mysterious things start happening to the dogs she trains and her business. Notes are being left and suddenly an officer is on her doorstep accusing her of trespassing on her own property. With bad things swirling all around her, she turns to the one man she has not been able to forget.
But someone doesn’t want Jenniffer to succeed. Can Jackson help her solve the mystery of who’s trying to ruin her life and save her from hell? Or will she finally succumb to the hell she should have died in the last time?