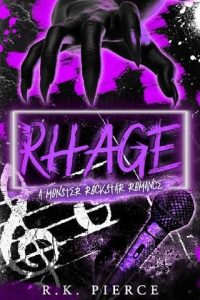 A powerful superstition plagues the townsfolk of Cold Springs. Everyone is terrified of the Watcher.

He’s a nameless, faceless demon who haunts the town at night, but despite the countless stories I’ve heard, I don’t believe them. He’s merely a myth, and I’m determined to prove it to everyone, even if it means heading into the cornfield alone on All Hallows Eve.
What I find waiting for me is unlike anything I could have imagined. A sentient scarecrow is bound to a stake, promising me my most salacious desires and begging me to set him free.
Will releasing him be the end of Cold Springs as we know it, or the end of a torturous century for a trapped soul?

Rhage – Some monsters choose to hide in the spotlight.
I never considered myself a groupie until I discovered Rhage, a masked metal band that’s quickly taking over the rock music scene. Now, the lead singer, Sebastian Alex, is all I can think about.
When I get the chance to meet him backstage at a concert, I don’t expect to catch his attention, but that’s exactly what happens. He notices me, and doesn’t let me out of his sight.
As excited as I am, I’m also terrified. There’s something dark and mysterious lurking beneath the mask he wears for the world, something sinister and dangerous that he’s hiding.
Is unveiling his secret worth risking my life, or is the mystery better left unsolved?