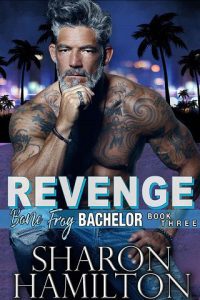 They’ve planned the wedding of a lifetime – but will enemy forces keep them from reaching the altar?

Marco is a former Navy SEAL who now oversees the construction of veterans’ housing. He’s counting down the days to his future with Shannon, the love of his life. However, the bomber whose blast injured Marco and destroyed his headquarters in Florida is still at large and still holds the potential to affect all areas of Marco’s life.
Shannon can’t wait until the day of her lavish wedding, which will take place at a Sultan’s palace in the Indian Ocean. All the RSVPs have already been counted when unseen forces threaten to destroy Marco’s vision and sabotage his company. With Marco fighting ruthless warlords halfway around the world, it’s up to Shannon to support him on the home front.
But is Shannon equipped to help Marco when danger engulfs them both? Will they succeed in their respective missions and arrive on the Sultan’s paradise island kingdom in time to walk down the aisle?

Revenge is the third book in the Bone Frog Bachelor series which follows Marco and Shannon’s steamy hot romance from the first time they cross a scorching hot path on Florida’s Gulf Coast to exotic locations around the globe.