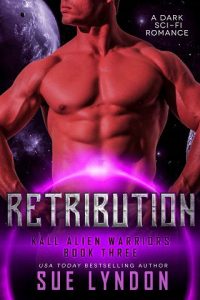 Her life belongs to him…
Renowned Kall expert Layla Remington is horrified when her estranged husband, Michael, murders a Kall female named Shessema in cold blood. She knew he was sympathetic to the human rebel cause, but she never believed he’d take his hatred for the conquering aliens so far. When she’s summoned before a Kall court, the ancient Custom of Retribution is followed–Layla is given to Shessema’s grieving husband, General Zamek, to do with as he pleases.

His mercy comes with a price…
General Zamek arrives at the courtroom, intending to exact his vengeance immediately and take Layla’s life. But one look into her soulful dark eyes and he falters. Instead of driving a sword through her heart, he carries her off, telling himself he’ll avenge Shessema’s death by making Layla suffer before he eventually kills her. But the first time he hurts her, nothing goes as planned, and he soon finds himself becoming fiercely possessive–and protective–of the little human female whose life will forever belong to him.