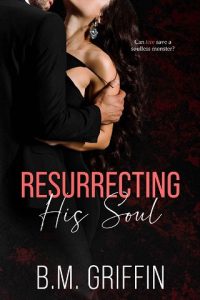 Their meeting wasn’t planned. A night of debauchery and blood stopped in its tracks the moment they met. A connection so deep and strong that it has the power to breathe life into a dying soul or destroy everything, leaving nothing but shattered hearts and death in its wake.

Meeting Lisandra was the best and worst moment of Ricardo’s eternal life. Never had he questioned his nature. Never had he been concerned for a life beyond his own. Now, she was the only thing he could think of, the one thing that mattered more to him than blood, more than himself, and he doesn’t have the first clue what it means. The only thing that is clear is he must have her. So he’ll have to face his past and overcome the voice in his head telling him he’s a monster. Lisandra knew that something inside Ricardo was dark, sinister even, but something buried deep within his soul called to her. He might have saved her life when they met, but he’d been the reason it was in danger to start.
Lisandra had been looking for a fresh start, leaving behind a life of abuse, and she never imagined jumping into a new world engulfed in darkness. In her wildest dreams she never thought her new beginning would include a vampire. She was no saint herself, but Ricardo’s world was something beyond most people’s darkest fears. Good thing Lisandra wasn’t like most people.