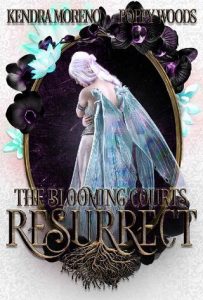 A deadly disease has spread through the Blooming Courts of Tuatha.
The louloudi are meant to flourish for a thousand years before they return to the Earth. Death has been a distant foe for so long, no one spares it any thought. Until now. As sickness sweeps through the kingdom, with the cure always just out of reach, the courts have never been filled with so many blossoms. Even in death, they breathe life.
Ila Slystina has been raised in the confines of the Orchidasi Kingdom, wanting for nothing, hidden away like some sparkling treasure, but she dreams of so much more. When she’s caught returning from a forbidden trip, her mother, the Orchidasi Queen, punishes her the only way she sees fit.
Ila is sent on her season far earlier than she should be. Now, she’s being paraded through the twelve courts like a prized cow and she wants nothing more than to escape.
Her mother wants her to collect power.
But Ila finds herself collecting hearts instead.
With death surrounding her on every side, and new dangers sprouting up at every turn, can Ila learn to balance the mischief that sings in her soul with her duty to her people?
After all, the courts aren’t the only things that must bloom . . .