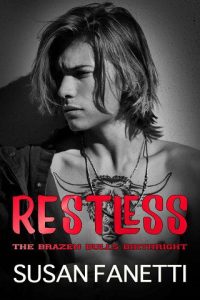 Like his older brother, Jacob Jessup is a legacy patch in the Brazen Bulls MC. Their father, Rad, was a legend in his time, and he left big bootprints to fill. Though his brother fills them easily, Jay has always struggled to measure up.
He hasn’t found where he fits in the club, and he hasn’t found a way to earn anyone’s respect. Not even his father’s. He’s sure no one thinks he’ll ever be anything but a screwup. Stewing in his failures and resentments, he’s grown bitter and combative.
One night, after getting bounced for fighting at their usual haunt, Jay and his buddy wander into an unfamiliar corner bar. Behind the taps is a beautiful woman who catches Jay’s eye at once, but there are about a hundred reasons he couldn’t possibly have a shot with her.
Petra Maros has built a comfortable life for herself. She owns her business and her apartment, she has a community of good friends and a loving relationship with her doting father. She isn’t living her dream, but she’s made something good and real of her life nonetheless.
Her father is struggling, though, and the consequences of his mistakes threaten to upend his life and Petra’s. She’s doing everything she can to pull him back from the brink, but she’s alone in the effort and losing hope.
One night, a couple of young guys swagger into Petra’s bar. They aren’t her usual clientele, and they look like trouble. But as they sit down and strike up a conversation, she realizes she might have judged them too harshly. One in particular draws Petra’s attention; he’s brash and full of attitude, but there’s something soft in his eyes.
At first glance, Jay and Petra are the unlikeliest of couples. But what’s on the surface is just the cover of the book.
Love comes when they settle into each other’s story.