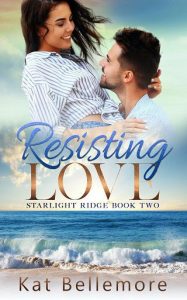 He’d rather ride the waves than the tide of romance.

Isaac Larson is the picture of surfing perfection, killer smile included. But ever since his long-time girlfriend left their small town for the summer—and never came back—it has been harder to find things to smile about. It isn’t until she turns up on the beach two years later, ready to pick back up where they had left off, that he realizes he’s finally ready to move on.
Leanne Warner had only intended to spend the summer in LA. A screen-writing apprenticeship with a Hollywood bigwig had been too good an opportunity to pass up. Her boyfriend, Isaac, would still be around when she got back. Except, leaving LA hadn’t been as easy as leaving Starlight Ridge. When she finally breaks free of its chains and returns to her hometown, Isaac is still there, as she knew he would be. But he isn’t the same person as when she’d left. And neither is she.

Will some small-town intervention and a lot of forgiveness be enough for Isaac and Leanna to figure out they were never meant to be apart?