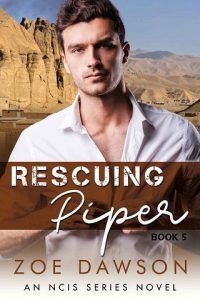 While recuperating in a hospital at Bagram Airfield from a mission gone wrong, Navy SEAL, Lieutenant Dexter Kaczewski, meets Senator Piper Jones, the sister of his best friend and fellow SEAL. With the mission under investigation and his friend clinging to life, Dex wakes to what looks an insurgent attack at the hospital. He saves Piper from death and discovers the “insurgent” was one of her Secret Service detail. Realizing she’s not safe, he takes her on the run with him as her protector. Wounded and against the odds, he intends to keep her safe at the highest cost.

Widow Piper Jones is out of her element in the war-torn Middle East and with her brother’s best friend, sexy and intense Dex. He’s a warrior through and through, and she’s been exposed to mostly tame politicians in DC. Taking her deceased husband’s vacant seat at his untimely death was very difficult for her, but fulfilling his term is something she wants to do for him. Now, she can trust no one except her rescuer, who makes her remember that she is a woman. It’s up to them to figure out the threat and neutralize it before her assassins catch up to them and complete the job they were hired to do. Exactly how far does this conspiracy go in the White House and in the military? Who wants her dead and why? Their very survival rests on Dex’s training and skill to get them back to the U.S. and to the answers before it’s too late.