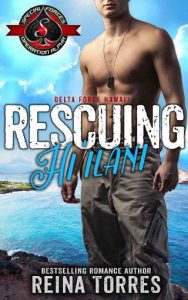 Jackson Guard, aka “Ajax,” gave up the woman he was falling for because it had been drilled into his head that being in the Delta Force was the greatest sacrifice he’d ever make. Meeting with “Ghost” and “Truck” from a Texas based Delta Force unit opened his eyes. These men… their entire unit were all happy, in love, some with kids. It gave him hope that he could have it all too. He just has to plead his case to the woman whose heart he broke.
Hi`ilani Ahfong was ready to give everything up for love and follow Jackson where ever he was stationed around the world, but he didn’t just put the brakes on, he left her on the side of the road wondering where she’d gone wrong. Her manager barely managed to hold onto the ‘I told you so’ she so richly deserved and helped her focus her energy on performing and building her career. Now, she’s back on track.
Everything changes when Hi`ilani walks into the middle of a murder. Fleeing for her life, she runs smack dab into the very man who’d broken her heart. Now the murderers are after her, needing to shut her up, and that’s trouble that can hurt the people she loves. Jackson wants to take care of her and keep her safe while the police track down the men. But she’s put her trust in Jackson before. She’d given him her heart and soul and he’d left her bleeding. How can he make her believe that this time he’s in for the long haul and not just ‘Rescuing Hi`ilani’?