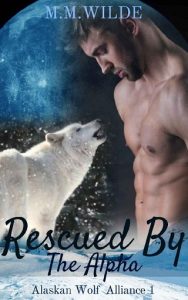 When wishing for a new life, Elam finds out the hard way he should’ve been more specific.

A year in the Alaskan wilderness was supposed to help nature photographer Elam determine his next move. However, hitting his head and being rescued by one of the hottest men he’s laid eyes on in a while is not getting him off to a great start. Elam is starting over and staying away from sexy guys is part of his new regime. He has a career to nurture in addition to repairing his bruised ego after his rat of an ex cheated on him multiple times.

Nicolai is a rare, blue-eyed white wolf shifter. He’s also an Alpha and the expected heir to his pack in the Alaskan Wolf Alliance. Much to his father’s dismay, Nic has stepped aside as ruler and ceded his spot as future head of the pack to his younger brother. As a gay shifter, he’ll never be able to provide a biological heir and has no intention of claiming a female mate for the sole purpose of giving him a pup. Instead, he’s made a life for himself miles away from the pack in his own section of woods.

However, fate intervenes and puts Nic on a collision course with a human mate. While Nic’s wolf might be on board with the idea, Nic wants no part of it. Why would he want to get tangled up with the stunning Elam only to have his cold heart ripped away once Elam decides it’s time to leave Alaska for good? There’s also the small detail that humans know nothing of the existence of shifters.

When chemistry, love and the truth of what the growly Nic is blindsides Elam, he has some tough decisions to make. Does he let Nic turn him? Never go back to his old home? But the biggest surprise is yet to be revealed when Nic and Elam discover the new life Elam had hoped for is more than just his own—and that there are wolves who are frothing at the mouth to destroy it.