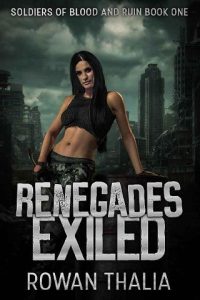 BioWar, World War III
Sixty years ago, the first shot was fired.
In the last ten years, our country has fallen. Chemical agents dropped mercilessly on friend and foe alike have created two new humanoid species and the world population has been reduced to small colonies of humans fighting against them to survive.
Out on a routine patrol, my team and I run into the worst kind of trouble. Branded and left for dead by our superiors, we form bonds that cannot be broken and find asylum with the enemy.
Seeking knowledge, my team of four and I race across the wasteland for the one thing that can give us answers: a sample of untainted DNA. Fighting zombies, mutants, and our own transformation. Aligned with vampires and on the run… We thought things couldn’t get worse until a hidden threat finds me.
When conspiracy is the norm, who can I trust?
The war is not over. The fight between the species has just begun.
Note: Renegades Exiled is a complete overhaul of the previous title: Rox’s Renegades. It has been fully rewritten, revised, and edited!