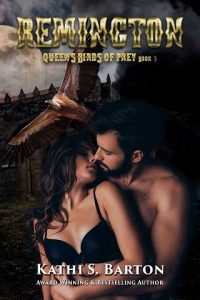 Remington and her warrior sisters had been around for several millennia. Their time of fighting wars and conquering kingdoms was now a distant memory. Before Queen Dante passed, she’d graced her prized warriors—the falcon, hawk, eagle, phoenix, vulture, and owl—with humanity as well as immortality.

Remi wasn’t unhappy with her life. She was just bored.

Harlin Tayler was working deep undercover, and he was thinking that hopefully, the case he was working on was about to come to an end. Sorrel was the worst sort of person, and Harlin was aiming to bring him to justice. But Sorrel wasn’t human at all. He was a powerful fae.

His case against Sorrel brought him to Remi, and from the moment they met, they both knew they were mates. Harlin also discovered that as a small child, his memory of who he really was had been erased for his own protection. Now that his memories had been restored, the cloak had been lifted, and they were all in danger. But with Remi by his side, they could face anything coming their way—he hoped….