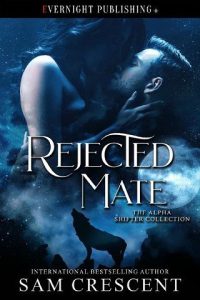 After going through her first transition, Constance finds her mate—who publicly rejects her. The pack wants her to leave, but Gage, the alpha, tells her to stay. His son may have rejected her, but he wants her to stay. At a meeting, Gage declares he will be the unmated male to claim her. She will be his.
All her life, she’s had a crush on the softly spoken alpha, and now he intends to be her mate. Is he doing it out of pity?

He has watched her flourish into a beautiful, curvy wolf, and since his son doesn’t want her, he craves her. He’ll stop at nothing to claim her for his own.
He loves her. He will mate with her.
But he couldn’t have anticipated what would happen when he finally leaves his mark on her.

Will he save her before it is too late?