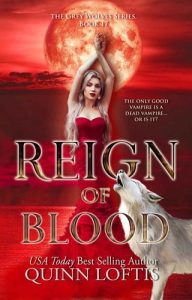 “Because I created you for such a time as this.”

The Great Luna’s words ring true for every member of the Romanian pack. Not only the wolves, but for all those who stand in defense of virtue, purity, and righteousness in a world plagued with monsters hell-bent on destroying every good in their path.
Time and time again, the Great Luna’s warriors have faced depraved adversaries, and each time they’ve risen to the challenge. With Fane as their leader, and members of every supernatural race willing to follow him, they will once again stand in the gap for those who cannot stand themselves, protecting those who are ignorant of the dangers all around them.
The Order of the Burning Claw has been dealt a near-fatal blow. But this has only made them more dangerous, like a cornered wolf, injured and desperate. Alston, the former high fae and leader of the Order, continues to wage war on Fane and his allies. Cain, the vampire king, has other plans, and they no longer include membership in the crumbling faction. He has discovered some powerful new allies, the very humans he once attempted to subjugate. Could they unwittingly be the key that allows him to put finally eliminate all competition for rule of the supernatural races? In the end, one species will reign supreme. One king will stand victorious. The rest will bow…or die.