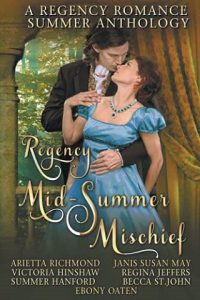 Stories of Regency heroines and heroes finding love in the face of obstructions: mayhem, malice, and mischief. Varying heat levels, both in the text and during the English summertime. Seven best-selling and award-winning authors team up to delight your summer holiday reading.

A Maiden for a Marquess by Arietta Richmond
A scandal, and interfering grandmother, an unavoidable marriage, dark family secrets revealed, an ever-present threat, a love that thrives despite it all.

Saracen’s Gift by Janis Susan May
An American heiress fulfilling her father’s last wish, Miss Clarissa Wentworth wasn’t sure what to expect of his childhood home, and her grandfather. The reality was beyond anything she might have imagined – in the worst possible way. Now, she finds herself a prisoner, trapped in her grandfather’s schemes. Can one kind neighbour, and the most magnificent horse she has ever seen, save her? Will she find love, or despair?

Seaside Summer by Victoria Hinshaw
Miss Veronica Montgomery desperately wishes to avoid the aristocratic suitor that her mother thrusts upon her. But when the family summer holiday brings her to Weymouth, and the returned soldier who manages the hotel, her perspective on everything changes. Can they overcome the difference in their stations and the machinations of others, to find love?

Wildflowers and Wiles by Summer Hanford
Miss Ellie Ellsworth only wanted to help her sister… but somehow, a small deception became a larger one, and now, she is trapped. The man she loves believes her someone else… and it appears that he is not who she thought him to be, either. Can they untangle the truth from the lies, before families and lives are ruined, not to mention their love?

The Journey by Becca St. John
The love of childhood has been pushed aside, and Lady Katherine has resigned herself to watching the man she adores marry someone else. Until a plot gone wrong puts them in an accidental compromise. Now, married to him, and off on a ship to save another, she is most unhappy – and then the murders start. Can the threat be unravelled? Will saving his life also save their love?

Weekend at Baron E’s by Ebony Oaten
Miss Jane Bartholomew, innocent and dutiful, has just been married to a Baron more than three times her age. A Baron with grown children who resent her existence, and the threat to their inheritance she represents. She knows that she needs to bear him an heir as soon as possible, even if that looks to be challenging to achieve. But when the Baron expires at the worst possible moment, Jane, with the help of the most handsome footman she has ever seen, must take desperate measures to keep the truth from the rapacious relatives, lest she, and all of the staff, end up cast out, penniless. Will desperation lead to love? or disaster?