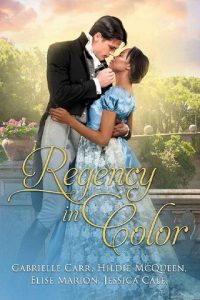 A MASTERPIECE OF REGENCY ROMANCE STORYTELLING…

It is the social season of 1817 and London is brimming with scandal.
From a beautiful heiress moonlighting as a tavern songstress, to society’s misfit and a sinfully sexy Duke striking an unlikely alliance.
Welcome to an enchanting collection of Regency Romance novellas featuring a diverse cast of heroes and heroines of color. We promise these stories won’t be ones you soon forget!
Welcome to Regency in Color, a diverse collection of five Regency Romance novellas featuring remarkable heroes and heroines of color whose stories will enchant you…

Designing His Duchess By Gabrielle Carr:

“Never try to emulate them. Their friendship is as false as their words are flattering. They call you the OBA (ordinary ball companion).”
Lady Juliana Drake swallowed the cruel truth in the Duke of Hersthire’s words. She was the misfit of Society. But not for long. With fierce determination and a plan — of sorts — she intends to shed the horrid moniker, and she’ll use the Duke to do it. Surely, the devilish rake had taken off enough fashionable dresses to know how to help her pick one out.
All she has to do is keep from undressing him first…

The Allure of a Reformed Rogue By Hildie McQueen:

She’s as determined to pursue him as he’s determined to keep his distance.
After a heartbreaking debacle, Thomas Sullivan decides to give up his roguish ways and become celibate. A test comes sooner than later upon meeting the lady of the house’s companion, Mary.
Mary Asher is not sure why the handsome new driver tries to avoid her at all costs, when he obviously finds her attractive. She decides to find creative ways to get time alone with him.

One Night Only By Elise Marion:

Thalia Ramsey has resigned herself to a quiet life running a respectable book shop in London’s West End. Nothing exciting ever happens in her world…until Stephen Dryden, His Grace the Duke of Westerfield, begins patronizing her establishment. Her girlish infatuation is completely ridiculous, and nothing will ever come of it. Yet, a heart’s hope is not so easily broken, especially when a chance encounter during a Vauxhall Gardens masquerade brings Thalia face-to-face with the duke.
A night of passionate romance is more than she could have hoped for, but once the night is over, will there be a chance for more?

The Nightingale and the Lark By Jessica Cale:

After years of failed auditions, rum heiress Andromeda Archambault gives it one last try at The Crow’s Nest in Shoreditch against her better judgment. She may be a lady, but to director Frank Creighton, she’s the Queen of Night, and she’s perfect for a starring role in his theatre and his life. But Andie isn’t who she says she is, and neither is Frank. Will their Phantasmagoria be a success, or will the skeletons in their closets close the show before it begins?