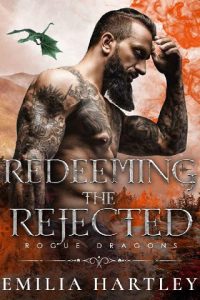 Years ago, Ford lost his clan, his mate, and maybe even himself. Now, he wants to be left in peace—until he meets Daphne, and she awakens passion in him unlike any he has ever experienced—even with his late wife.

Ford Coleman has been living a half-life since he avenged himself on his clan king after that monster killed his mate. He doesn’t know why he hasn’t lost his mind or burrowed into the hills, but for now, he’s minding his own business, working on his skills as a chef, and staying away from other dragon shifters, who might not appreciate a king-killer. He’s especially wary of the startup clan of renegade shifters who have taken up residence in his mountain town, even if he sympathizes with them. He’s considering looking for a new hideaway when Daphne, the sister of one of the new dragons, comes to town, and Ford finds himself yearning for her. He can’t have her, though. He had a mate once already, and besides, she belongs with her brother, with the local clan. After what he did, Ford knows he can never be accepted into a clan again. It’s hard to put aside everything he wants just when he’s starting to feel again, but he can’t let Daphne suffer for his past.

Daphne Albright needs a vacation, but what she gets is more work in a new location—her brother needs her to help his mate through the transition to becoming a shifter. Of course, Daphne wants to do it. That’s her job, and she’s good at it. But when she’s strangely attracted to the Uber driver she calls to pick her up at the airport, that’s all the excuse she needs to take a little time to herself. The driver runs from her, though, and she has to track him down. She tries to convince him that she’s not asking for a lifetime commitment, just a fling, but he doesn’t seem to believe her. She’s not even sure she believes herself. After all, despite the short time they’ve known each other, her heart breaks when she finds out he’s had a mate before. A relationship between them seems doomed from the start, but she can’t help wanting it anyway.