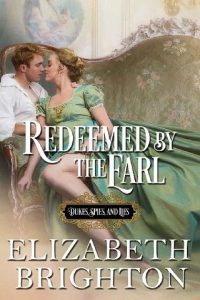 Miss Jemma Jennings made a mistake and fell in love with a man she could never have. No matter how many afternoons they spent together as children or how much she enjoyed stealing a kiss from him, earls don’t marry their steward’s daughter. Not even when those daughters grow up and become one of the king’s spies. And especially not when they are tasked with solving the murder of a wealthy and influential countess. A countess who married the earl Jemma still loves.
Lord Laurence Haddington, eleventh Earl of Essbury, has always done what he’s supposed to do, including marry the “right” woman from the “right” family. Which hadn’t included his steward’s daughter. Even if he’s been in love with Jemma since he’d been in short pants. Then Laurence’s wife is murdered, and when Jemma comes to his aid, he finds himself falling in love with her all over again.
It’s a second chance at love, but second chances aren’t free. Those who killed Laurence’s wife will do anything to keep their secrets. Even if Jemma can keep Laurence alive, nothing can close the gap between an earl and a spy. Nothing, except maybe love.