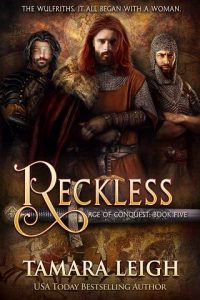 THE WULFRITHS. IT ALL BEGAN WITH A WOMAN

A battle. A crown. The conqueror. The conquered. Medieval England—forever changed by the Battle of Hastings. And the rise of the formidable Wulfriths.

A REBEL MOST WANTED

Vitalis of the Saxon resistance wearies of leading men to victory only to next lead them to death at the hands of the invaders. But when an opportunity arises to shame the Norman who claims England’s throne, he takes it, as well as proof of that shaming. Now more than ever, William the Conqueror is determined to capture the rebel leader. And greater that possibility when Vitalis must keep his word to recover an impetuous Norman lady abducted by Saxon allies. Can he free her without making enemies of his own people? More, can he forgive the one determined to pry open his heart when bloodshed proves the price of her release? And what is to be done with the usurper’s son who is as determined to capture his sire’s enemy as the vengeful warriors pursuing the elusive rebel?

A LADY MOST RECKLESS

Lady Nicola of the D’Argents thinks too highly of her ability to defend herself and too little of consequences. Thus, when good intentions go awry, she finds herself abducted and her chance of escape thwarted by her own recklessness. Now a captive on the Isle of Ely—the last bastion of English resistance—she discovers the mighty Saxon warrior, Vitalis, seeks to return her to her family. And that her fascination with this enemy has not abated in the years since the girl of her first looked upon the man of him. But when he sets in motion his plan to free her, once more Nicola proves her own worst enemy. Though he may never forgive her for what she costs him, she is determined to make a way for him in Norman-ruled England—even at the sacrifice of her reputation.

From William the Conqueror’s harrying of the North to the fenlands of East Anglia, the tale of Lady Nicola and the mighty Vitalis unfolds in the fifth book in the AGE OF CONQUEST series revealing the origins of the Wulfriths of the bestselling AGE OF FAITH series.