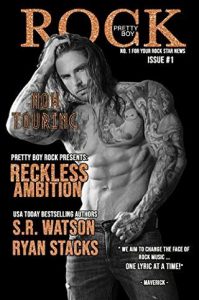 There’s only one thing that Maverick despises more than these three defining attributes — a liar!

Maverick Jennings joins his fellow bandmates to form Reckless Ambition — his past a distant memory and an opportunity to be a rock star is in his future. His brush with the elite has hardened his perspective of the world and has shaped his ideology of the man he prides himself to be. Women are a distraction, and he refuses to let them stand in the way of what he views as important — climbing the music charts to stardom. His rules are forged in the thread of his armor, an impenetrable guard against any woman who wishes to be more than one night.

Guinevere Vandenberg has a plethora of secrets, but they each serve a purpose. She takes a job as Reckless Ambition’s publicist, determined to build the life she was never supposed to have. She would do anything to protect her chance at a future, one free of nepotism and influence.

She has every detail of her life outlined and strategized, every variable considered. There is only one contemplation she didn’t account for…

Reckless Ambition: Issue #1 puts a rock star twist on novels like Fifty Shades of Grey and The Steel Brothers Saga!