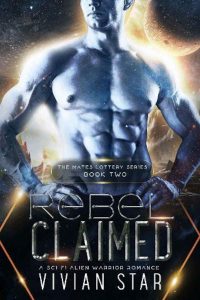 Entering The Mates Lottery was the only way to save my sister.
And then I got kidnapped by a rebel assassin who won’t let me go.
My kidnapper, Xair, claims that I’m his mate. That we are somehow destined to be together, but I want only one thing:
To escape the planet I’m now trapped on, and the insane mission Xair has planned for us, and then save my sisters who still need my help.

But escaping my assassin mate won’t be easy.
Not when he wants my body to claim as his.
Xair is used to stealing and taking anything he wants, but I won’t let him take me that easily.
Even if he is sexiest alien assassin I have ever seen…

Rebel Claimed is the second book of an eight-book series called The Mates Lottery. Sexy alien warriors meet feisty Earth women who steal their hearts in this series. Will they steal yours too?