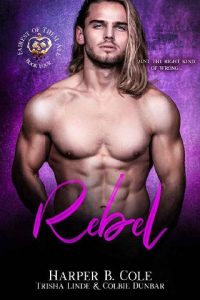 Rebel (Fairest of Them All #4) by Harper B. Cole, Trisha Linde, Colbie Dunbar – Free eBooks Download

The right kind of wrong…

Omega wolf shifter Mac has always dreamed of bigger and better things–or more specifically, anything that isn’t pack life. He yearns for bright lights, loud music, excitement, and a wide variety of people… but instead, he’s been stuck in the woods, in his brother’s shadow for his entire life. And even worse, everyone still treats him like a pup needing supervision. But he’s been working hard and saving his money, and at long last, his moment of freedom has arrived. It’s time to rebel.
When human alpha Giles finishes his construction job in Dusk Fall, the last thing he expects is to be handed a babysitting gig. But when he learns that his job is to show Mac a good time in the city, all while keeping him safe, he finds he doesn’t mind the responsibility. Everyone sees Mac as the pack darling, in need of coddling, and who can blame him for wanting to stretch his legs. And if anyone knows how to have a good time, it’s Giles.
Neither of them intend to act on their physical attraction. After all, they’re all kinds of opposite: shifter and human, big city and small town, and more importantly, alpha and omega. But when it comes right down to it, maybe they’re not as different as they first thought. In fact… they might just be the right kind of wrong.