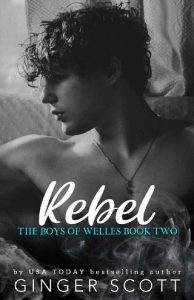 On the surface, Cameron Hass always seems a bit risky. First to take the dare, last to leave the tracks in the face of an oncoming train, the Boston rebel has always liked to flirt with danger. But underneath, he’s terrified. Not about breaking an arm or getting pulled over for driving twice the speed limit, but about the man he’s going to become when he graduates from Welles Academy. His role models have never really been much to look up to.
Brooklyn Bennett, on the other hand, always appears to have it together. Every button is done, every hair in the perfect place, every grade not just an A, but an A+. Beautiful, smart, and from political royalty, Brooklyn set her future goals at the age of five, and she’s never strayed from the path of following in her parents’ diplomatic footsteps.
Until now.
Surviving a terrifying car crash her junior year left Brooklyn questioning a lot of things. Losing her best friend left her feeling alone. But Cameron’s always been a good listener. And messy or not, his heart has always been in the right place. And when Brooklyn needed someone, he was right there. Maybe . . . he’s been there all along.
But how do chaos and rules go together? And what happens if the rest of the world wants to keep them apart?