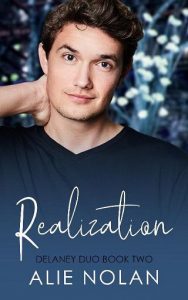 Realization: I can’t keep pretending everything is fine.
Dylan isn’t as happy as he wants everyone to believe he is. He moved across the country for what he thought was his dream job, leaving his dad and best friend behind, but soon realizes the job doesn’t outweigh his desire to go back home. Encouraged by his best friend, as a way of meeting new people, he organizes a blind date for Valentine’s Day with a guy he met online. The last thing he expects is for his blind date to be his dad’s best friend.

Realization: I want the one thing I was sure I’d never want.
Russell has spent a long time pretending he’s not getting older, and acting like he’s still in his twenties. Now, in the latter half of his forties, and notoriously anti-relationship, he’s realizing he might want more than just one-night stands. A secret, long-distance relationship with his best friend’s son was not part of his plan though. Will the sneaking around and lying destroy his twenty-year-long friendship?