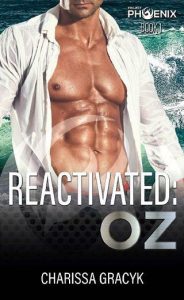 “Project Phoenix…Find Oz…”
Those were the last words her brother Jonah said when he died in her arms. Convinced that he was murdered, Navy Intel Officer Allegra Steele learns that “Oz” is her brother’s former Navy SEAL teammate, Jack “Oz” Cullen.
When Allegra asks for Jack’s help, she doesn’t expect the undeniable electricity that sparks between them. And, Jack, still trying to adjust to civilian life, knows he should stay away from the intelligent beauty.
Swept up in adventure and each other, they uncover a sinister evil called Project Phoenix, an experiment that gave each SEAL on Jack’s team a super power. When Jack’s ability suddenly resurfaces, he can hear other people’s thoughts—and, Allegra’s steamy internal dialogue makes this super sexy soldier sweat.