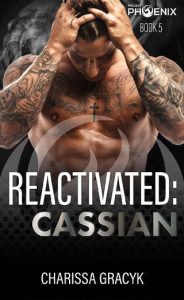 Tortured for the past year, Cassian “Ghost” Stone has been stripped of his identity and dignity. A shell of a man, he’s haunted, scarred and on the run from the controlling clutches of Project Phoenix.
Lost and confused, he collapses, praying that death will finally end his suffering. Instead, he awakens to a blonde-haired angel and no memories of his past. But the demons inside his head are clawing to get out and vivid nightmares force him to confront the atrocities he’s committed against others, including his former Navy SEAL team.
When Hailey Lockland finds the injured, half-naked man, her empathetic heart refuses to let her walk away. She yearns to help the tormented stranger and can see past his haunted eyes and endless scars.
Cassian doesn’t believe he can be saved, but Hailey is determined to be the light to his darkness. When he vows vengeance against Veronica, the woman who broke him, they find themselves thrust into a showdown 30,000 feet in the air…and Hailey knows only one of them will make it back down to the ground alive.