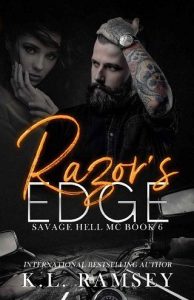 There was no way that Razor was going to fall for that woman. She was just a child, and he wasn’t about to play the starring role in anyone’s “Daddy” fantasy. Firefly wasn’t for him, and that was what he needed to keep telling himself.
Being in law school came with a big price tag. Having to steal groceries was a low point for Firefly and getting caught felt even lower. Now, all she had to do was try to pick herself up and put her life back together and that would not involve falling for the older biker who was following her around like a damn puppy. Razor hung out at the same MC that she did, and he was a lawyer, which gave him some crazy notion that she needed his help. She didn’t and as far as she was concerned, she never would. All she needed to do was convince Razor of that, and she’d be able to move on with her life.