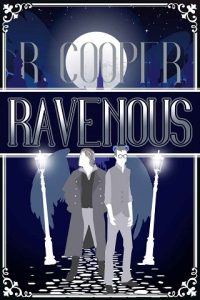 Those who come back from the mysterious place known as the Realm, if they come back, are changed. Some return haunted. Others with knowledge of themselves that they will not share, and the magic of the Realm at their disposal. The peculiari, as these few are called, are tolerated at best, feared at worst.

Nicodemus isn’t anything like one of the exceptional, adventurous peculiari. For the most part, he’s content to keep house for the peculiari of the Arawn Agency and rarely ventures outside of the manor they all call home. As an asterion, one of the unwanted, monstrous children of the Realm, Nicodemus is human in appearance except for the ram’s horns growing from his head, and prefers the company of those who don’t judge him. There’s just one hitch in his otherwise safe and orderly world. One awkward, inconvenient, twice-a-year problem in which Nicodemus goes into what can humiliatingly only be called a rut.

It’s a secret he keeps from the others. But this year, unable to stand the thought of spending his rut alone, he ventures out in search of company—only to run into Bel, the one person he hopes will never discover his secret. Bel is powerful enough to make even other peculiari wary and far more experienced than Nicodemus in the ways of the world. But tonight, Bel isn’t out seeking pleasure. He’s on the hunt for a true monster that has slithered from the Realm to hurt people, and he seems to think Nicodemus is especially in danger. The Realm, and this creature, are drawn to people who want, and sheltered, lonely Nicodemus, with his rut approaching, is nothing but want.

According to Bel, the best way for anyone to stay protected from the temptations of the Realm is to indulge themselves enough to make their desires manageable. Alone with Bel for the first time after Bel vows to keep him safe, Nicodemus starts to wonder what it is that he really wants, and why Bel understands the appetites of a monster so well, and if perhaps Nicodemus should follow Bel’s advice and indulge some desires of his own.