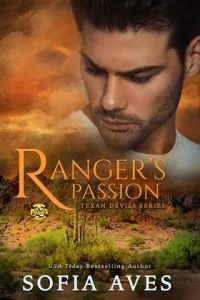 Brodie Martinez made no secret that he was the son of an infamous cartel head…at least, not to his boss.

Asked to keep his secret upon his employment as a Texas Ranger, the Mexican born Texas Ranger spent his last few years undercover rescuing trafficked women and reducing narcotics trade across the border. He’s never had anything to hold him in one location, until Wren.
Saving her from his father’s drug lords was an easy choice. Leaving her vulnerable and prey to a toxic family while he heads back out of Texas and hundreds of miles away twists his moral compass. realising he’s falling for the girl he swore to protect-even if it’s from himself-Brodie throws himself into his work and right into his estranged father’s path. Torn between choosing between duty and his heart and using Wren’s memory to keep his focus, he breaks all the rules both he and his boss set when he first started undercover work.
When Wren is attacked in the safe space of his own home he offered up for her use while he’s in Mexico, Brodie can’t work out if the target was her or him. Promising Wren he’ll stay away from the obsession that constantly drives him south over the border between Mexico and Texas, he discovers every good intention can’t save him from falling deeper for the slight but strong traumatised woman he loves, even if she isn’t sure she can love him back.
But an obsession isn’t easily pushed away, and a call about his father’s whereabouts draws Brodie back into the life he swore he’d put aside, locking him away from Wren when she needs him most-and can’t reach him.