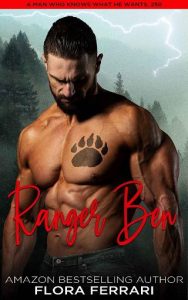 Growing up I’ve had two great loves.
Okay, three.
My dad and his best friend, Ranger Ben.
And my freedom at college.
And maybe pasta… That makes four.
The poster boy for the National Parks, it wasn’t hard to develop a natural, schoolgirl crush on Ranger Ben Slater.
Far from it.
The man is a living god.
But would an older man like that go for a thick-set, short, and younger college graduate like me?
I know what my dad would say.
There’s a storm brewing, and despite my diversion into Ranger Ben’s territory, I don’t know about it.
But I don’t think it would stop me even if I did.
I’ve got a feeling though, almost an ache that’s led me north. Right into his clutches.
My own shyness would normally prevent me, but the gods have favored me with a storm.
A terrible storm.
And one only Ben and I can come out of together, stronger. No matter what my dad thinks.
Right?
I mean. Ben is my dad’s oldest, closest friend. They’ve known each other forever and I’m his only daughter.
Why wouldn’t he want us all to be happy ever after?

Everything made sense until her graduation, which I missed because of work.
As a Park Ranger, I don’t exactly work nine to five.
I even blocked it from my mind when she was old enough to go to college.
My oldest friend. My brother almost, her dad.
Ignored by force, the snapshots of her becoming legal.
Hell, I used to bounce her on my knee.
But now? Jesus. She’s a grown woman. Almost.
Stacey.
A feeling more than a name that haunts me. Ruins my sleep and makes me want like I’ve never wanted anything before.
When I get the call she’s ‘potentially missing’ near my park, I know I have to find her.
It’s all I can do to stop the memory of her.
The regret of not being there, telling her how proud I am of her.
How much I wish a girl like her could even look at an older guy like me.
Knowing full well I have everything she needs.
Everything she wants and desires.
If only she had the opportunity to ask.
Ranger Ben is waiting to scoop her up.
To save her. To give her everything she needs and more.

*Ranger Ben is an insta-everything standalone instalove romance with a HEA, no cheating, and no cliffhanger.