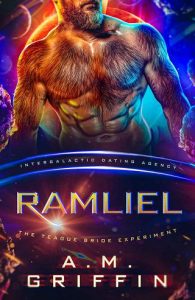 The Yatur sent a spaceship to Earth with a seemingly simple exchange. They would provide humans with advancements in technology for medical and scientific purposes, and the only thing humans had to give in return were women.

When Mia Brown is chosen to travel to Teague to mate with an alien, her normally mundane life is turned upside down and there’s no way out of it. Now, she has no choice but to pack her bags and spend the rest of her life on another planet, far from Earth. Too bad that once she arrives, the new and happy life she was promised is anything but.
Her mate doesn’t want anything to do with her.

Ramliel Takeria has always known his mate was traveling from a distant planet and he’s spent his entire life trying to forget the momentous occasion was fast approaching. The contracted bond wasn’t something he wanted. His father had contracted the union when he was born. Determined to live his life as his own and not shackled to a human, Ramliel vowed to set her up in his childhood home and never cross paths with her.
But a chance meeting between Mia and Ramliel leaves Mia furious that her mate doesn’t recognize her and Ramliel intrigued by the female he has distanced himself from.
Ramliel will do anything to earn his mate’s forgiveness and have her welcome him with open arms.

Their love is short lived when a lie breaks them apart. After heartbreak and pain, can Mia trust Ram with her heart again?