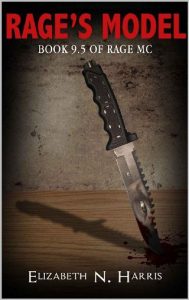 Rage MC is under siege, old ladies and children locked down under heavy security. Allies surround their women with protection because no one knows who the targets are. A serial killer on the loose with a grudge as wide as an ocean. He’s been locked up, but he’s not given up. He made plans, and now he’s got the chance to fulfil those plans and to hell with anyone who tries to stop him.
A son makes a decision on his future while his brother surprises everyone with his news. In a time filled with turmoil, there is goodness and joy to be found. Not even the unseen threat can deny Rage that. But there are two daughters of Rage out there, heavily protected but not at home. A father is torn between staying with his wife and children and riding off to grab his daughters.
A girl comes into her own. Life wasn’t great, but it taught her the lessons she’ll need to survive this. Everything she experienced was leading her to this moment. When he comes for her, he’s coming for a daughter of Rage, and she’ll make sure he remembers that when she faces her fears, and she becomes Rage’s Model.