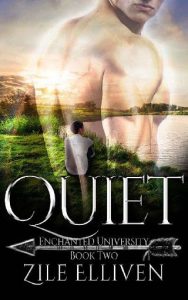 After years of abuse for being different, Isa finally escaped his family by going to college. Or at least he thought he had until he realized even moving to another state wasn’t enough to leave them behind.
Ultra-conservative, harsh, and extremely controlling, they were determined to force him to conform to their ideals. Even in public, he couldn’t escape their fundamentalist views, and they sought to end his private life. So, who was the silent giant who swept in and rescued Isa from being attacked by his sister? And why did he like to carry Isa around like his own, personal stuffed toy?
Briar’s fascination with Isa was unusual, but so was the way their very souls seemed to communicate. The connection between them is so consuming, the pair are caught unaware when a meddling fairy decides to release a previously unknown spell binding Briar – causing unforeseeable -but fascinating – consequences.
For a moment, Isa thought he had it all. Those few days of peace inspired the kind of hope he’d never allowed himself to hold on to, but with the return of his family, they could very well cost him the rest of his life.