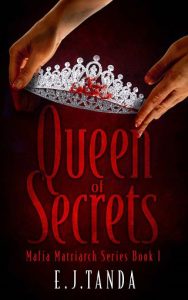 In the dusty summer orchards of 1939 San Jose, California, seventeen-year-old Violetta Giordano lives a bucolic life. But appearances are deceptive. In the Giordano family, ties to the Mafia stretch as far away as Sicily and bind just as tightly.

Sacrifice your heart and soul.
Ready to embark on a journey of self-discovery, sexual desire, and forbidden love, with a handsome young immigrant named Gaetano, Violetta’s plans are uprooted when she is forced into an arranged marriage with one of the most notorious crime bosses in the country. To protect her family and the man she loves, Violetta tempers her heart and surrenders her sanity.

Endure a life of treachery and abuse.
The deeper Violetta submerges into her underground, macabre world, the harder it is to gauge her morality. Such is the life of a Mafia queen.

Play the game to survive. No one refuses a Don and gets away with it. The mob always collects.
Edgy and emotional, ruthless and romantic, Queen of Secrets is told through the captivating lens of two courageous women whose mother-daughter bond—not of blood but through blood—is their only escape.