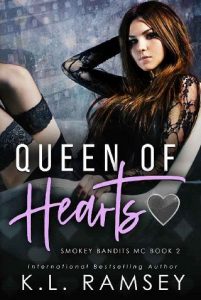 Knox Heart was a man who liked control. In fact, he craved it, but meeting Beck threw him into a downward spiral of chaos that he couldn’t seem to escape. The problem was, he didn’t know if he even wanted to escape the mayhem she brought every time she walked into the same room with him. His assistant wasn’t who he expected her to be, and that both excited and terrified him, at the same time. Surviving his desires for Beck Dax was going to be a challenge but he had faced worse.
Beck wasn’t sure how she had gotten herself into her current crazy predicament—sleeping with her boss and making it a dirty little secret, kept between just the two of them. No one knew about them and that was how their “relationship” needed to stay—a secret. The problem was their undercover rendezvous had an expiration date attached to it—nine months to be exact. First, Beck needed to figure out how to tell Knox about their ticking time bomb. Then, she’d have to figure out how to convince him to let her keep her job because that was all she had the right to ask him for. Beck promised Knox a “no strings attached” relationship and this baby was definitely a string—a very long, messy string.