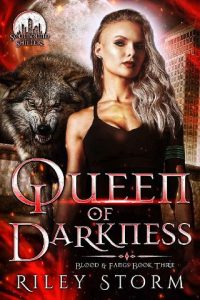 The vampire queen has called for my death. I know I should run. But I can’t.

Everyone else thinks I should flee and find a safe place to hide. They don’t think I can take her on, and who can blame them? The vampire queen is over a thousand years old. She’s had centuries to grow stronger and learn how to fight. I’ve had a month. I’m brutally outclassed. Almost.
I possess one advantage—if I can bring myself to use it. My dual heritage. There’s only one other like me on the planet, and at the height of his powers, he challenged the very gods themselves. It’s a double-edged sword, though, considering he went insane with bloodlust. But it’s the only chance I have to end her ruthless reign and save not only myself but my mother.
Taking her throne won’t be easy, and I know better than to do it alone. First, I’ll have to convince Aaron that it’s the right move. There’s some history between him and her that he’ll have to overcome. I just hope that it won’t ruin the budding future I see between us. After all, what’s the point in going up against the darkness, if there’s no light at the end?