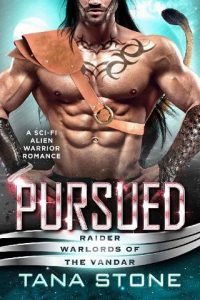 As the empire’s most ruthless female assassin, I’m used to killing without a second thought. But I’ve never infiltrated a raider horde before. Or seduced after a vicious Vandar warlord.

When I contrive to be captured by the raiders who terrorize the galaxy, my plan is to seduce Raas Bron before I assassinate him. That’s before I lay eyes on the huge, menacing Vandar with his long, dark hair and even longer tail. Despite his size and fierce reputation, the dominant warlord is no brainless beast. He’s a formidable foe who takes me to his bed and fires something within me that’s long been dormant. Soon, I don’t know if I’m seducing him, or if he’s seducing me.

The longer I pursue the Raas, the harder it is to remember my mission. Even as the alien warlord claims my body as his, I attempt to protect my heart and remind myself of my duty. Can I fulfill my promise to the empire, or will I lose myself in the passionate raider’s desire to possess me—body and soul? If I don’t kill the warlord who’s claimed me, I know I’ll become the one pursued by the empire. And the empire does not show mercy to rogue assassins.