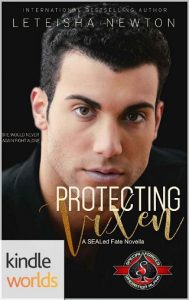 Tiffany “Vixen” Cannon is a ghost, an agent for the Secret Intelligence Service formerly known as MI6. She fights on foreign soil in secret, creates dossiers in clandestine operations—and never fails. When she’s tasked with a delicate reconnaissance mission into a suspected mastermind ISIS member, she is compromised by a Navy SEAL team out for blood. James “Cry Baby” Alvarez knows one thing: his loyalty to his brothers is as fierce as he love for his country. The ISIS unit out of Qatar has targeted not only his brothers but the women they love, and James is done playing nice. Information leads the SEAL team to the tip of the Balkans with disastrous consequences.

Faced with the real possibility they’ve been betrayed from their native soil, James is forced to detach from his unit and work with Tiffany to find the source. The job isn’t an easy one, and he could lose more than he could gain. But his brothers are behind him, and they won’t let him fall. That is, if Tiffany doesn’t snatch the foundation from underneath him first.