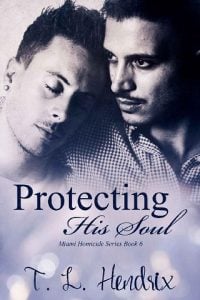 Kellan Brooks took life one day at a time. He had to after his world was turned upside down when he was a kid. He’d conditioned himself to always be in the background, keep his eyes open, and face shit head on. That’s why he was so good at his job with the homicide team in Miami, Florida. Kellan had one weakness that he made sure he stayed away from at all costs. Jason Mathews was his punishment. Kellan had been pushing him away for over a year. He knew that he would never have Jason the way he wanted him. Kellan could never let anyone get that close to him again. Not after what he did. He didn’t deserve a life of love and happiness like everyone else. When Kellan’s past comes back to haunt him, he knew that he’d made the right choice of pushing Jason out of his life. Or did he?

Jason Mathews loved his job as an EMT. When he wasn’t working, Jason was hanging out with friends, running on the beach, or relaxing at home in front of the TV. He didn’t go out and party like most of the single men his age. After one night with Kellan, Jason was hooked. Kellan Brooks had ruined Jason from other men. He swore to himself that he would give Kellan time before he tried again to be with him, but Jason could only be turned down so many times before he got the hint that Kellan didn’t want the same things that he did. Jason backed off and kept himself busy with work. One night during the middle of his shift, Jason got a phone call that would change his life forever. Kellan was put on the backburner now. Jason’s priorities changed in the blink of an eye.

Will Kellan and Jason find each other again? Will Kellan finally let go and be with Jason like he wants or will Jason walk away for good?