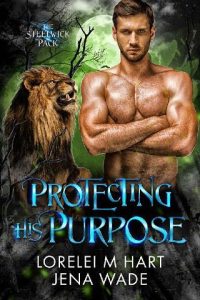 A cup of sugar—a dash of spice…oops is that a spell?

Alpha Syman’s life in the Steelwick Pride has always been everything he needed. He lives with his found family and makes the world a better place for shifters. That is until he crossed paths with his fated mate—a mate who doesn’t recognize him or so he thought. He’s willing to be as patient as his mate needs, even as the mating sickness inside him grows.
Omega Lewis’s life had been far from sunshine and roses. Escaping to the Northbay pack gave him the future he never thought he’d have, one that was safe and filled with love. And then one day everything changed. Suddenly he senses a mate. He wants to run to his arms and let him know he is his forever. Only one problem; Lewis’ past has his wolf terrified of lions and he’s not sure he can face his wolf rejecting the man he knows was put on this earth just for him.
After the birth of his brother’s twins, Lewis gathers the strength to face what he thinks is his biggest fear and moves to Steelwick pack to be with his mate. He soon discovers he has a gift he never suspected and will need it as he faces his past and helps Steelwick try to take down The Omega Games.