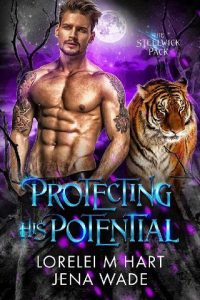 Not all cinnamon rolls come from Steelwick’s bakery.

Alpha Rainer never lets his injury get in the way of his work as a member of Steelwick. He might have a prosthetic leg, but he can take down the strongest shifters in a fight on the worst of days. At least he used to be the fiercest fighter in the pack, since his last mission he’s a mess—his tiger’s not doing well coming off the potion forced upon him, the forced mating scent has his body in a turmoil, and then there is the new omega taking up his every thought.
Omega Silvano’s life was turned upside down when he applied for a manny position only to find the job nonexistent and the entire situation far more sinister. Forced to be a contestant in the Omega Games, he saw no choice but to risk everything and help Steelwick shut them down permanently. Nowhere else to go, he agrees to stay with Steelwick temporarily and help with the pack’s young. It’s a nice enough pack, even if Rainer keeps ignoring their connection.
If only that were Silvano’s biggest problem. His life is at risk from the people who should’ve protected him the most. Now it is up to Rainer to save his mate and take his place at his side where he’s always belonged..