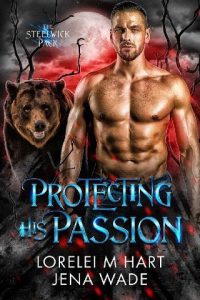 Sometimes we get second chances, even when we didn’t deserve them.

Steelwick’s Alpha-Elect Armand left his den to seek a life that was his own, not one dictated by birthright, political negotiations, and forced matings. Now, more than a decade later, he is running the enforcer pack, making a difference to both human and shifter kind alike, and surrounded by people he cares about. Then why does he keep longing to go back to the den that only cared about power and positions?
Omega bear Mathis’s life is in shambles. His true mate rejected him years ago, his den collapsed, and he is the sole provider for three children left in the aftermath of it all. He vows to love and protect them as his own, but being a single omega teetering between the human and shifter world is hard and Mathis isn’t sure he’s enough for the cubs.
When things go from bad to worse and Mathis and the children are attacked by coyotes, he seeks refuge at a motel to regroup. The last person he expects to see there is Armand, his fated staring at him as if he recognizes their bond for the very first time.