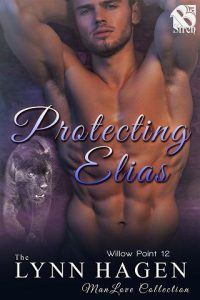 Elias Hatch moved to Willow Point to get away from his brother. Aziel is becoming more and more violent toward Elias, and Elias thought moving away would solve his problem. It didn’t. Aziel shows up at his door one morning, practically threatening Elias to give him money for his dark habits. When Elias meets his neighbor, he finds out that Mitch is a deputy. But Elias has his own secret, something that might make the entire town turn against him.
Deputy Mitch Lennox knows Elias is his mate when he introduces himself to his new next-door neighbor. The guy is funny, sexy, and can cook like a dream, which is great because Elias keeps inviting him over for dinner. But Mitch has already witnessed Elias kicking his ex-boyfriend out and fears his mate won’t want another relationship. He’s determined to show Elias how much he cares about him, until Aziel rocks Elias’s world. Now it’s up to Mitch to find his mate and save him before it’s too late.