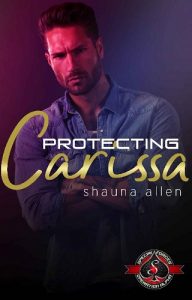 Cody “Kid” Wilbanks is a loner. Quiet. Observant. Meticulous. The youngest of his highly trained United States Marine Corps Force Reconnaissance team, he knows he is often underestimated, but that’s only made him work harder to earn his place among this family of deadly warriors—his brothers—the men he’d lay down his life for without a moment’s hesitation.
Now, along with their closest allies in Wolf, Tex, and their entire team of Navy SEALs, they’re closing in on their biggest enemy to date, but things won’t be easy . . . in fact, they might be downright dangerous. And as the teams realize their biggest asset might be the elusive hacker who has been tormenting them for months but just slipped through their hands, they embark on the biggest chase of their careers, but Kid is in for an even bigger surprise . . .
Carissa Brewer—the girl he left behind after one perfect night together.
He’s held her heart since the moment she laid eyes on the sexy, quiet Marine, but now she holds the ultimate secret that could either rip them apart forever or be the key to unlocking the future she’s been dreaming about.