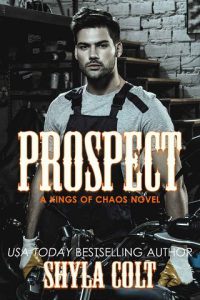 A legacy, Bolton was born into the Kings of Chaos. Despite a neglectful mother, the brothers and extended family made sure he never wanted for anything. Now his only goal is to serve the group that gave his life meaning. He never thought he’d love anything as much as the club, then he met Whitney. College and differing opinions tore them apart, but they always got back together. The decision to prospect became the final straw that made her walk away. When her fugitive father starts to sniff around and threaten her safety, Bolton steps up as the man she needs, whether she realizes it or not.

Life stopped for Whitney at seventeen when her father attempted to murder her mother. Her mother survived, and they became fodder for the news. Running to college out of state, she distanced herself from the media circus. Then she made the mistake of falling for a future biker. His lifestyle goes against her desire to fly under the radar and avoid more violence, but her heart is set. When her father comes back into her life and begins to stalk her, Bolton’s arms are the ones she longs to run into.

Can they figure things out and survive the whims of a mad man who feels he’s been wronged?